4. Putting the Parts (of Speech) Together

Multiple books on the same topic or with similar predictable patterns make good use of a GLAD Sentence Patterning chart because the same chart can be added to during a series of lessons.

Both books titled At the Park are Level A, but the language demands of the two texts are quite different. One book follows the pattern I can [simple verb]. where the present tense verb is the story word, In the other book, the story words are gerunds (swinging, riding) that are part of verb phrases (am swinging, am riding) and the verb phrase is followed by the prepositional phrase “at the park.”

Modeling how to add on to simple sentences can help students construct more precise sentences both orally and in their writing.

In the first lesson:

Have students share ideas for how they can add to the simple sentences. For some books, it might make sense to add adjectives or adverbs. At the Park works well for exploring prepositional phrases (“with my dad”, “on my bike” “off the play structure.”)

Record students’ ideas on the sentence patterning chart (see above) and/or use Post-its to add directly to the book (see below).

Students can use the Sentence Patterning Chart to say, write, and draw fun new sentences. A student volunteer can use a Post-it in each column to flag the components of the chart that they would like to use and then speak their complete sentence aloud.

I jump with my dad.

I ride off the play structure.

I slide on my bike.

In a subsequent lesson:

Display another book on the same topic or with a similar grammatical structure. Have students share the similarities they see between the two books.

If the sentences in the second book are more complex than the first, point out and explain the differences. For example, in the second version of At the Park, the prepositional phrase [“at the park”] remains the same, but on each page there is a new gerund [swinging, riding, jumping]. Explain that the verbs have the ending -ing because they come after the word “am.”

Provide the rationale for the grammatical structure, for example ,“In this book, the boy tells what he does at the park at the same time he is doing it.” 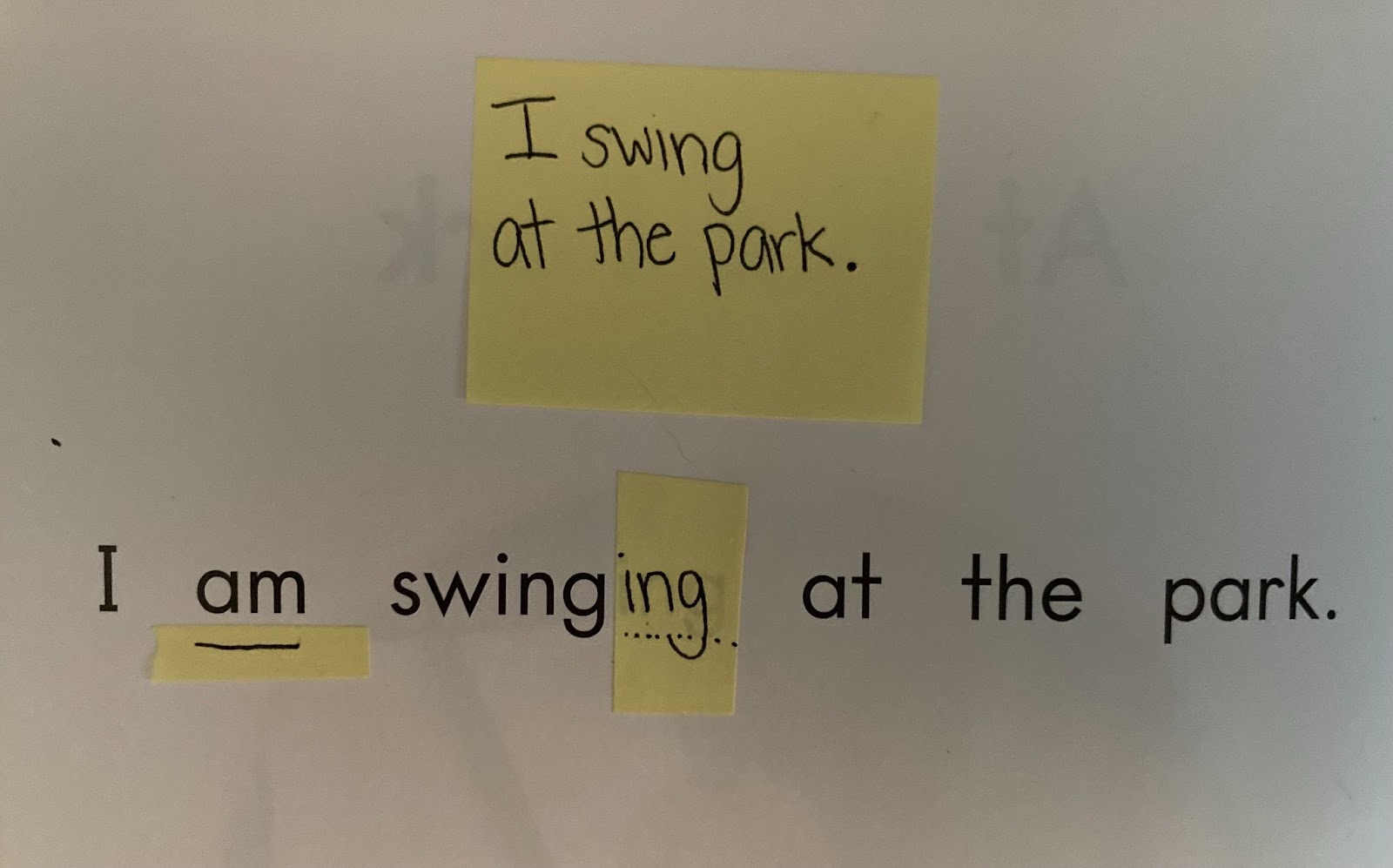 Read the book aloud while adding the new words to the Sentence Patterning Chart.

Students can then use any grammatical combination from the chart to say, write, and draw new sentences.

I am jumping with my dad.

I am hiding behind the tree.

I am sliding off the play structure.

The new sentences can be used to create a class book or each student might write their own to add to the classroom library.